Some folks like to say that Montclair, the winsome New Jersey township 12 miles west of Manhattan, is the optimal spot for urbanites ready for more bang for their real estate buck.

Vaknin and his wife, Sarah Kanter, 37, left the Upper East Side for Montclair more than six years ago, shortly after opening his first eatery in the town of 40,000: tasty Mediterranean spot Mish Mish. Now Vaknin, Kanter and kids Mayaan, 7, and Leo, 4, are firmly rooted within Montclair’s charming streets, which display an alluring combo of vintage homes and small businesses.

“Everyone here has done the same direction,” says Vaknin. “They came from New York, or they came from Brooklyn, and they want a quieter corner but still want to be close to the city, work in the city and keep ties to the city.” 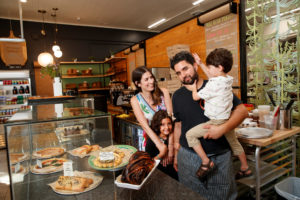 Meny Vaknin of “Chopped” fame — who moved to Montclair from the Upper East Side with his wife, Sarah Kanter, and is raising Mayaan, 7, and Leo, 4, there — opened his third restaurant in town this year. “Montclair is ideal for businesses and for my state of mind,” he says. Tamara Beckwith/NY POST

The new Mishmish in Montclair is as good as ever