The new Mishmish in Montclair is as good as ever 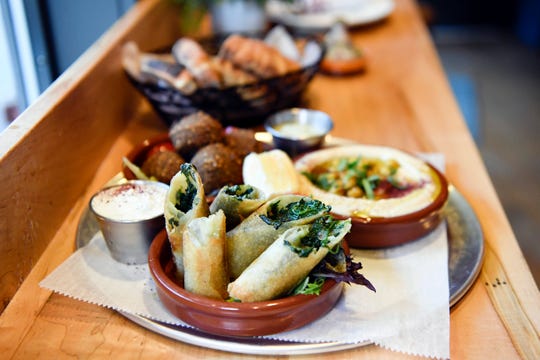 The Turkish “cigars” with cheese and spinach at MishMish Cafe on Wednesday, Oct. 23, 2019, in Montclair. (Photo: Danielle Parhizkaran/NorthJersey.com)

Been to MishMish lately?

Chef Meny Vaknin’s Mediterranean boite in Montclair made food critics and food lovers alike sit up and take notice when it opened five years ago.

The Israeli-born chef’s first restaurant — he has since opened charming Marcel Bakery & Kitchen and grab-and-go Luisa, both in Montclair as well — now has a new menu and a more mature, sophisticated look.

The originally 20 — currently 40 — seat restaurant recently unveiled a new “all-star” menu consisting of the restaurant’s most popular dishes over the past half-decade plus a few new dishes (Turkish cigars, anyone?). And the orange walls and open kitchen have been replaced by charcoal black walls, a long banquette, a semi-open kitchen and a sunny window counter.

Have the changes made MishMish (the word for apricot in Hebrew and Arabic) even better than it was when New Jersey Monthly called its food “fantastic” (Jan. 2015), NJ.com gushed that Vaknin’s dishes were “distinctive” (Feb. 2015) and the New YorkTimes gave the restaurant its second best rating — a “Very Good” (May 2015)? 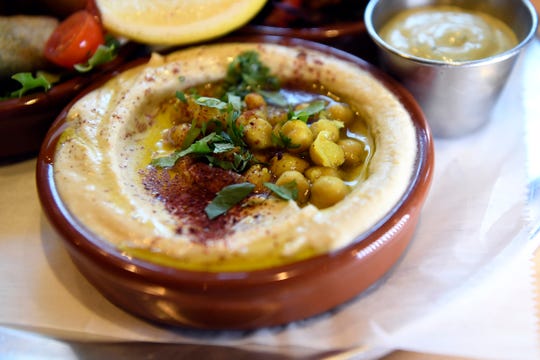 Decor-wise, certainly: It has a more spacious, airier feel. Food-wise, it’s as good as ever.

Vaknin is not a chef out to perform high jinks with his creations. He does not tuck a pair of tweezers inside his chef’s coat pocket. His menu does not require an advanced degree in gastronomy to decipher. His food is down-to-earth, unaffected, heartfelt. It is the food of his youth, the food Vaknin, who came to the U.S. at age 22 and graduated with honors from the French Culinary Institute (today the International Culinary Center), grew up eating in Israel with his Moroccan-born parents. It is the food his mom and grandmom cooked.

Smoked eggplant ($8), his twist on that standard Middle East appetizer baba ghanoush, couldn’t be simpler. It is essentially a two-ingredient dish. Instead of tahini, he blends yogurt into the mashed, smoked eggplant, making the dish so wonderfully creamy that I could have happily eaten it, using the warm thick pitas on the table to sponge up every last bit, and called it lunch.

The new appetizer Turkish cigars ($8), a Mediterranean mezze, reminded me of the popular Greek spinach pie known as spanakopita, only crunchier and a bit cheesier —not as delicious, though pretty darn good. Instead of just feta, the crispy cigars also featured mozzarella and the Macedonian cheese kashkavel, and instead of phyllo, feuille de brick, a slightly thicker dough, was used to stuff the cheese and spinach into; though fried, these cigar treats were grease-free.

Vaknin’s hummus (from $14 to $23 depending on toppings) is as good as it gets. Made daily with fresh lemon juice, cumin, garlic and Israeli tahini, the chickpea dip was silky, smooth and sublime. As a special on the day that I and a colleague dropped by, it functioned as a super-soft bed for tender beef chunks in a pool of subtly sweet apple cider with turnips ($23). Vaknin should make it a regular menu item. He reports that the Everything Vegan hummus ($16), a menu staple that features tofu and sautéed mushrooms, is “everyone’s new favorite.”

I am not a fan of falafel, deep-fried balls usually made with chickpeas or fava beans; I find them greasy and/or dull. Vaknin’s Herbed Falafel ($14) did not sway me to like them more. Though grease-free, they were somewhat dry and bland; the herbs seemed to be MIA. 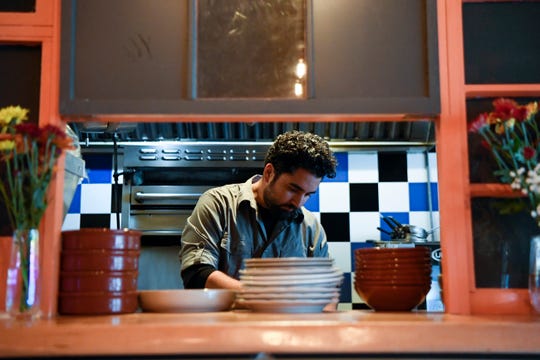 Chef Meny Vaknin cooks in the kitchen of his restaurant, MishMish Cafe, on Wednesday, Oct. 23, 2019, in Montclair. (Photo: Danielle Parhizkaran/NorthJersey.com)

There was no such problem with the amazing shakshuka with lamb merguez sausage ($18). The classic North African and Middle Eastern dish of poached eggs in a slightly sweetened tomato sauce was perfectly flavored with onions, cumin seed, small cubes of carrots and honey. The sausage, much to this sabra’s delight (yes, I, too, was born in Israel), screamed Middle East; they were seasoned with the heady spices of the region, including cilantro, cumin, garlic and harissa. The eggs, just as delightful, oozed their runny yolks right into that red sea of wonderfulness. It’s a dish not to be missed.

MishMish is not to be missed. Just bring along a bottle of wine (it’s a BYOB) and enjoy.